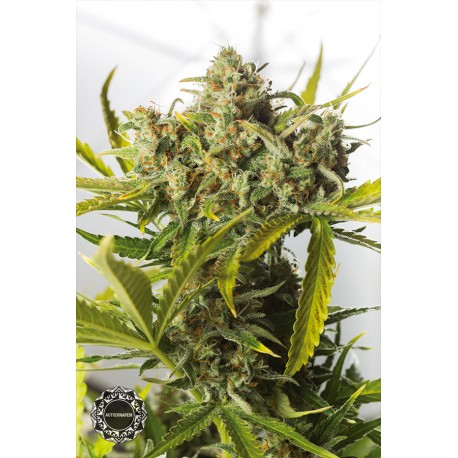 Indica-dominant cannabis seeds that are autoflowering and obviously of the highest quality.

Indica-dominant cannabis seeds that are autoflowering and obviously of the highest quality. Naturally, this type of cannabis seeds is available in the collection of Dinafem so when you, as a grower, are considering cultivating this type of weed, the cannabis seeds of this producer are probably a good option. When you like fruity tastes, you should definitely give the Blue Critical Auto a chance. The Auto Blueberry and the Critical were at the foundation of this variety and the arisen crossing has already positively surprised many growers.

When you grow these weed seeds, you will get a plant after approximately two months of which you will be able to harvest a large number of buds. The amount of resin you will find on the buds can surely be called striking. Despite the rich harvest, the plant arising from these cannabis seeds remains relatively small which is an absolute plus for the grower who does not have a lot of available space.

You should be able to expect a colourful appearance for a plant that has the colour “Blue” in its name. When you grow the Blue Critical Auto in the right climate outdoors, you will absolutely not be disappointed in that respect: this weed plant responds to the differences in temperature between day and night in quite a remarkable way as the plant will start to show purple-like, blue colours. However, this phenomenon will be less likely to appear during the indoor cultivation.

Smoking this indica-dominant type of cannabis is a real taste fest during which pine tree, lemon and berries alternate, both in scent and in taste. A powerful effect on the body takes you to a state of relaxation while smoking the Blue Critical Auto.